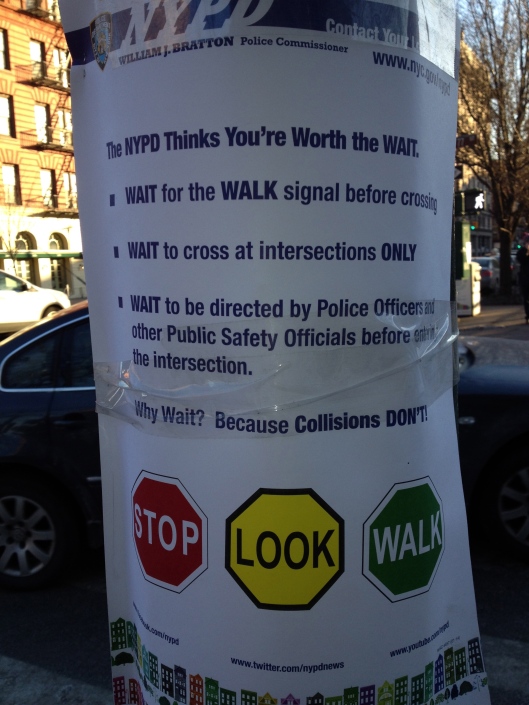 Mayor de Blasio doesn’t want you to be hit by a car.

The new mayor, Bill de Blasio, and his Police Commissioner, William Bratton, (both from the Boston area) are already making changes. Recently, three people were killed by cars at or near the same intersection of 96th and Broadway on the Upper West Side within nine days. (I used to live two blocks away, and can remember seeing the aftermath of two pedestrians who were killed outside my building on Broadway.  It’s a sobering thing to witness.)

There’s a general feeling in New York that enough is enough.  Too many pedestrians are being killed by cars.  NYPD has put up signs asking people to wait for the walk sign before crossing the street, which of course is only dealing with part of the problem.  The biggest part of the problem is the two tons of steel coming at you despite the fact that you’re crossing the street with the walk sign.

But I will say, speaking as someone who has experienced both New York and Boston traffic, I was stunned–and impressed–by the changes to New York traffic since I lived here.  I remember a lawless place where drivers and cabbies drove like maniacs. I remember cabbies cutting across four lanes of traffic to beat out other cabbies to pick me up, and that every single day I had close calls with cars barreling their way through hordes of pedestrians who were crossing legally, missing me and other people by inches.

What I saw today and yesterday was mostly orderly traffic patterns, no speeding, no running red lights, as is done all the time in Boston.  Clearly, a lot has already been done to calm traffic but clearly too, more needs to be done if pedestrians are being mown down so frequently.

Speaking of New York streets, the London artists Banksy recently spent a month in New York creating street art, doing one piece a day during the month of October. My friend Steve showed me one on a wall at 79th just east of Broadway. The owner of this building had installed a piece of plexiglass over the art and a security camera to preserve the art.

Take a look, below.  Do you know what this child is doing? Any guesses beyond pounding a red pipe with a mallet? 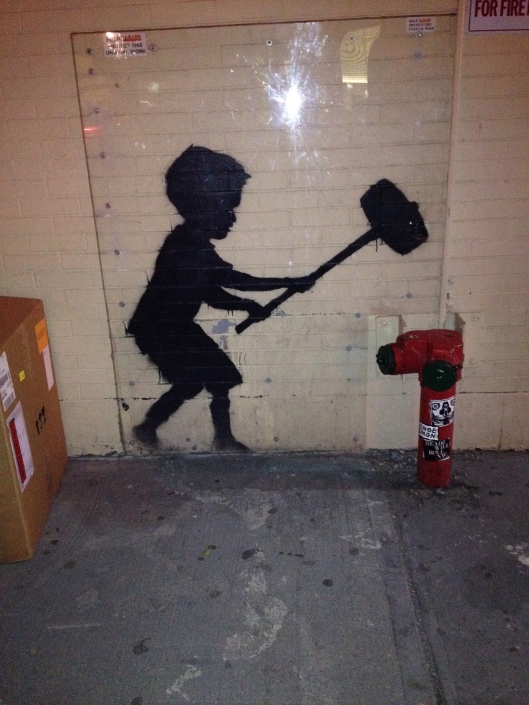 Here’s a larger view.  You will see how clever Banksy has been in incorporating his little figure with something that was already there to make his art: 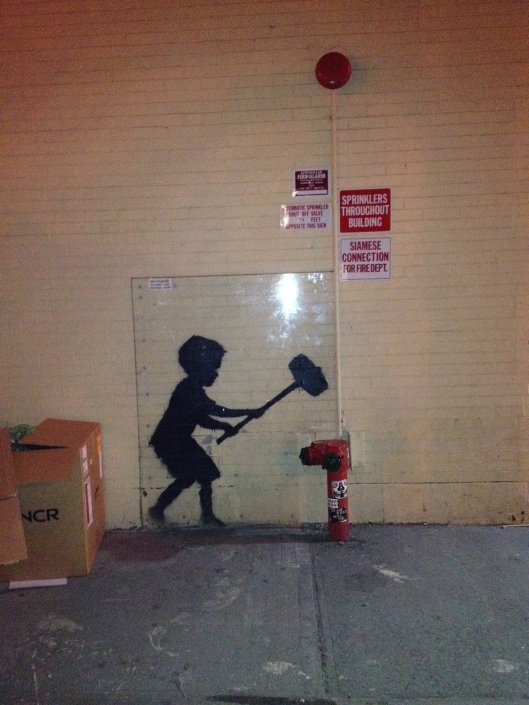 With a wider perspective, you’re able to see what Banksy’s little fellow is doing:  a “test of strength,” also known as a “high striker,” such as as you’d see at carnivals and at county and state fairs.
My time in New York would not be complete without a trip to the theatre.  I was lucky enough to get one of the very last tickets to Sweeney Todd at Lincoln Center. Here’s the English actor Emma Thompson taking a curtain call.  And yes, it was fabulous! 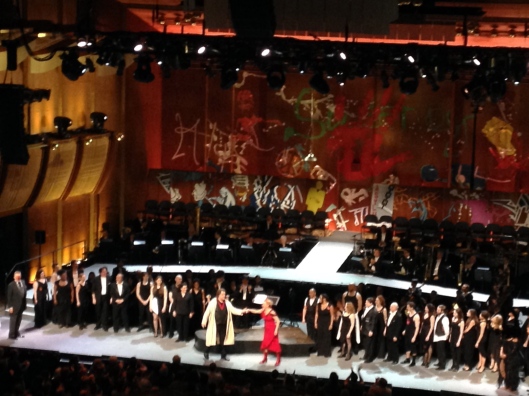 One last photo from this day:  a boat on the Hudson, with the opposing view of buildings and water towers reflected in the sky above the river: 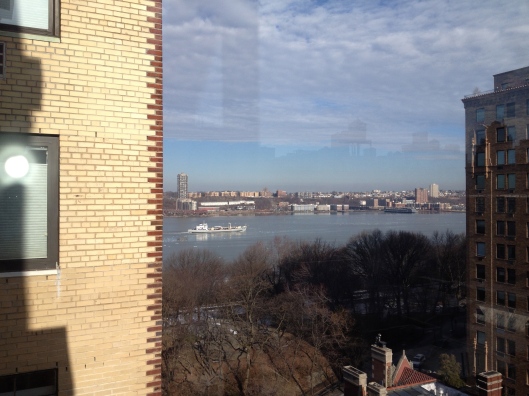 And that’s all for now! Have you spent time recently in New York?  Is there anything about the city that surprised you?  What is your favorite thing about New York?  Your least favorite?  Please comment below.

Here are three earlier posts on what I observed in New York, here, here, and here.